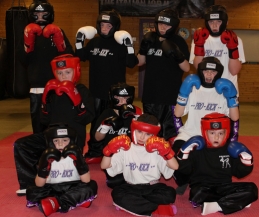 This team event is sponsored and organised by The Peace Fighters initiative. Swiss Co Founder for the initiative, Sir Carl Emery will be present to award prizes.

Tweet
Last training session TODAY at 5pm for ProKick kickboxing Kids from Belfast as young as 7 years-old who will strut their moves in front of a packed audience when they face their Celtic cousins, the Wolfpack gym from Athlone. The Southern Irish junior team is headed by top coach, Leon Parsons. The acclaimed coach, Parsons, brings his team to Belfast on Sunday 13th April for a light-contact friendly team competition. That's were juniors will have the opportunity to compete on a fight-card alongside some of the country's top amateur fighters in an International show dubbed, Easter Eggs-Travaganza.

The Junior team event of high-kickers will start the show at the Holiday Inn. The squads are made-up of five boys and three girls, all competing over 2 x 1 minute rounds - No decision will be given and all matches declared a draw, only for those 13 years and over will be judged.

This is about the kids showing of their moves, gaining confidence and enjoying the day without the added pressure of winning or loosing, said event organisers.

This team event is sponsored and organised by The Peace Fighters initiative. Swiss Co Founder for the initiative, Sir Carl Emery will be present to award prizes.

For the hardened fight fan you will not be disappointed, no less than 20 fights back-back with competitors from, Switzerland, Belgium France, England, Scotland, ROI and Northern Ireland. All, who will go between the ropes alongside fighters like; Johnny Smith, Samantha Robb, Alex Ciocio and world champion Ursula Agnew.

Tickets are on sale, priced £20 with limited ringside left at £40.  ProKick kids are at a knock-down price at just £5 - children must wear their ProKick uniform be accompanied by an adult.

Really looking forward to seeing our young Pro Kickers strut their stuff on Sunday, I’ve watched you all practice in the gym and you look awesome, so have a great time on Sunday and enjoy showing off your skills.

Schools finish this weekend too, so have a fantastic Easter and remember to eats lots of Easter eggs.