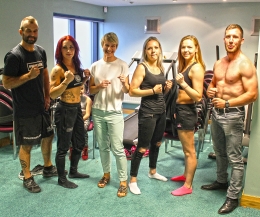 Weigh-ins No. 2 at the Park Ave Hotel

Tweet
Second part of the weigh-ins took place at 9pm at the Park Ave hotel three more matches done & dusted with everyone on weigh. Eight fighters have now been weigh'd-in for tomorrow's kickboxing event at the Queens Hall in Newtownards. First-up was Cathy McAleer & Beatrice Marcialis as both fighters hit the scales at 54.2 respectfully. Then Rowena Bolt and Julia Chatellier paired off. Then Charlene Best Faced Lorie Lacroix to make the weight and finally, Henry Moore squared-off with Thomas Poulin.

Cathy McAleer (Belfast, NI) Vs Beatrice Marcialis (Cagliari Kickboxing, Sardinia)
Both fighters weigh'd-in at 54.2kg
This was the first to be weigh'd-in for Sunday's kickboxing event at the Queens Hall in Newtownards. The weight is over for Cathy McAleer & Beatrice Marcialis as both fighters hit the scales at 54.2 respectfully. The match was made by the WKN world office at 54kg and under K1 style rules over 4 by 2 min rounds. The next weigh-ins are at 9pm at the Park Ave Hotel.

All the fighters hit the weight - details below from 9pm tonight

Undercard:ProKick Kids will open the show with a selection of light-contact matches.

Tickets are available from the ProKick Gym or here on-line

Check out the fight card at the Queen’s Hall Newtownards