Made in ProKick - World Champions 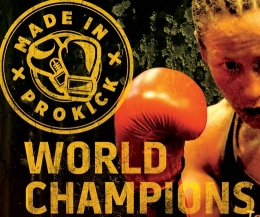 It's the return of the MAC, aka Cathy McAleer.  She is one of Ireland's most successful female Karate competitors, and she too will go between the ropes in as part of her campaign to become a WKN world kickboxing champion. Billy Murray has this earlier:  "We had a great event in March where Cathy won a WKN Full-Contact amateur European title and the rest of the team done exceptionally well also, so I'm looking to keep our fighters busy when they are still on a high from our previous show. Cathy will face one of her toughest challenges to date when she squares off with Dani Hodges (Burntwood, England)"

The undercard is made up of various other fighters from the gym, most of whom fought at the "Total Divas and The Undercard" sell out show in March.  And there will also be a few fighters having their debut in the ring which has shaped up to be a real good event.

Details of the public weigh-in for the main and semi main event will be posted soon.

Made in ProKick - World Champions

Tickets are on sale now

In the meantime send any inquires about tickets, or sponsorship opportunities, to info@prokick.com

There was all of us thinking the Mac was going to relax. Relax! what am I talking about, that would annoy the hell out of her. Hehe. After this I am making her go on holiday. Although we will have to pull staws on that one. I am hoping a cruise which she will hate and I have no idea what her choice will be but will let you know the outcome. I hope I win. Anyway Mr Murray it was a fabulous show in the holiday inn. Some of the people who had never been to one of your shows,now have the bug and are travelling back for more from England. I am really looking forward to an other heart stopper moment and a sell out. Goodluck Cathy!