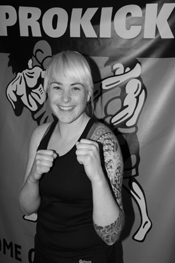 Samantha Robb started at ProKick early 2011, Samantha has been keen on fighting ever since she joined the gym and in September 2012 the girl from Tyrella beach in Co.Down got her first opportunity to climb through the ropes. The writer Robb, headed to Galway with a team of ProKick fighters and participated in a white color Boxing event, Samantha with the taste for victory has not stopped training and was UN-beaten in her first 12 contests. The ProKick fighter is back on a winning streak and a plans to keep it that way. Samantha Robb takes double GOLD at the world Martial arts games in Geneva - first in the boxing and then on the same day wins GOLD in the the amateur K1 kickboxing devision. That's not all as the next day the 'Tattooed Dragon from Tyrella Beach in Co.Down entered the light contact karate style fighting arena and won GOLD. LadyKiller Robb lifted the WKN Amateur Light welterweight European title 66,7kg under Low-Kick rules. Samantha stopped Emilia Czerwinska (Poland) as Emilla failed to come out for the forth round. September 2014 saw Samantha Robb win her first World Title at the Lords of the Ring event held in Belfast`s Ulster Hall. The Tattooed Dragon had her first bout of 2015 during the Total Divas event held at the Holiday Inn on 29th March. It was a prestige match and although Robb lost on points she remains consistently optimistic and stated after the bout that "in competitive sports you are always learning". KICKmas 2015 saw Samantha get her opportunity for rematch against Mallaury Kalachnikoff-Lakli for the WKN World low kick rules. After a tough fight 5 rounds Samantha was victorious and remained the WKN champion. Samantha is currently training for her next fight.

Other Fights to be posted